As we near the resumption of the 2019/2020 Absa Premier League soccer season, the big teams are revealing new gear. Defending champions Mamelodi Sundowns and last year’s runners-up Orlando Pirates unveiled their new kits on Monday. The teams previewed their home and away kit that they win don throughout the season for the different competitions that they will contest. Fans at large gave their impressions of the new jerseys that still maintain the team’s official colours.

As a result of finishing as the best two club sides in the PSL, the two giants of South African football automatically qualified for the CAF Champions League preliminary round stage. Sundowns will take on Congo-Brazzaville side AS Otoho d’Oyo while Pirates will hope to beat neighbours Green Eagles of Zambia. The Bucs will hope for better fortunes this time around after failing to advance from the group stages of the tournament last season. Downs, on the other hand, will look to go a step further after succumbing to the might of Moroccan outfit Wydad Casablanca in the semis.

The Mamelodi Sundowns jersey is inspired by the power of the sun, with patterns of sunrays on a yellow jersey. Sundowns FC new kit is designed by technical sponsor PUMA. The away strip also has an identical pattern; however, the jersey is predominantly white. The team’s shorts for both strips will be blue, with the PUMA logo and the team’s crest on the bottom.

The Orlando Pirates new jersey draws its inspiration from a previous design that the team wore. The home kit design shares striking similarities to the jersey that the class of 1995/96 wore. The jersey features a solid white colour with black lining. This jersey is famous for being the strip that the Bucs wore when they lifted the Champions League trophy. Adidas, which is the technical sponsor of the Sea Robbers also unveiled the away kit that is predominantly red with climacool finishing for optimal hydration when playing. Before Pirates take on the Zambian, they will debut the new kit in the Black Label Cup against Kaizer Chiefs. 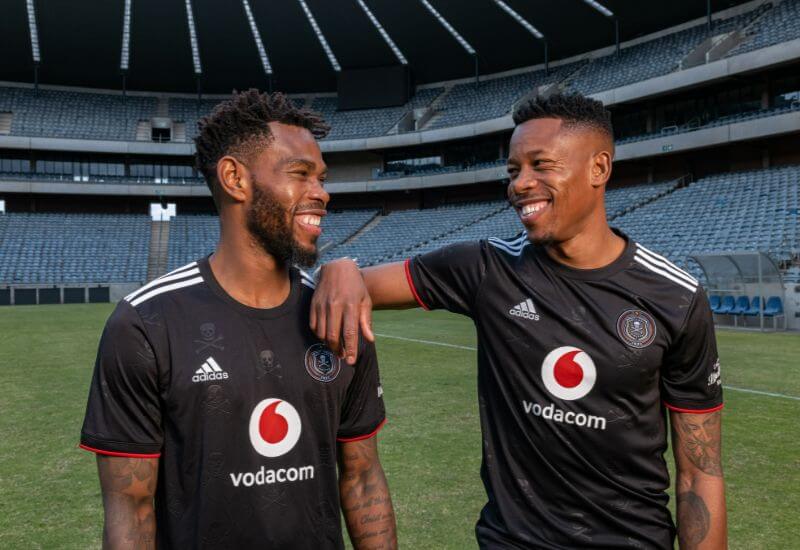