The fixture between Mamelodi Sundowns vs. Kaizer Chiefs always tosses up a flurry of emotions, on-and-off the field. The head coaches of both teams were embattled in a war of words this week in the build-up to the top of the league clash this weekend. Both teams occupy first and second place in the Premier Soccer League (PSL) log standings after Sundowns won their midweek game 1-0 against Highlands Park.

The Absa Premiership fixture was forced into a change of venue due to Chiefs’ upcoming games with fellow rivals Orlando Pirates. The Telkom Knockout (TKO) 2019 quarterfinal draw pitted the Soweto giants against each other while the two teams are scheduled to play a PSL game on 9 November. The official date of the TKO quarter-finals match is slated to be on 2 November. This means that they will play each other twice in the space of one week. The games are coming in thick and fast for Amakhosi. After Downs, they have a PSL match against Chippa United on November 5 in-between the Pirates games.

The 2019-20 PSL season has a different look to it at the top after standings. Chiefs have been enduring a trophy drought of late. They finished the last season outside of the top eight to miss out on the MTN8 Cup. After eight games played, Amakhosi lead the PSL standings with two points having just lost one game and won six. 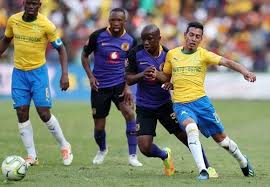 A win for Downs will take them to the top of the league with a game in hand. The Brazilians remain the only South African team taking part in the CAF Champions League. This has led to the club having played fewer matches to Chiefs, playing catch-up games in between their continental commitments.

Catch Mamelodi Sundowns vs Kaizer Chiefs at Loftus Versfeld, on 27 October with the kick-off scheduled for 15:00 CAT.