Fresh from qualifying for the Telkom Knockout (TKO) final, the Mamelodi Sundowns will be looking to get their league campaign back on track with a win in the Mamelodi Sundowns vs AmaZulu match up.  The Brazilians will be wary of the threat posed by AmaZulu after the Durban-based side won the last league match both sides appeared in. The men from Tshwane can draw inspiration from the last match they played against AmaZulu, demolishing the coastal team 5-0 in the 2019 TKO Cup.

While Sundowns are riding their luck following their quarterfinal win despite scorer Gaston Sirino getting a red card, they will hope that they take their cup form into the league. The Uruguayan is arguably one of the key players in the Downs squad and is set to miss two of Sundowns’ domestic fixtures. The 28-year-old is also facing a possibly long stay on the sideline as the PSL disciplinary committee deliberate on the punishment he got for slapping players on several occasions caught on camera.

AmaZulu were not active over the weekend but had the opportunity to watch Downs in their semifinal match against Golden Arrows. The last Mamelodi Sundowns vs AmaZulu head-to-head should give coach Jozef Vukušič some solace after they managed to beat Downs the last time both teams met in the league. Usuthu is currently in the 15th position on the PSL log standings, with only three wins to their name. The three wins came in the last four league games. This will give them hope that they can get something out of the game. 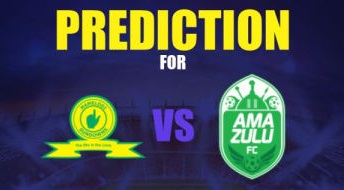 The game won’t be easy for the Durban outfit, having to play the match away. They will hope to take advantage of the gap left by top goal scorer Sirino on the team. Goalkeeper, Denis Onyango, was replaced by Kennedy Mweene in the TKO Cup on Saturday with a suggested hamstring problem and could possibly miss the showdown. They will want to close the gap between them and Kaizer Chiefs after the Soweto Giants opened a 10-point lead when they defeated Downs.

With all that said, the depth in Sundowns’ side is enough to fill the void left by both players. The Brazilians remain the favourites to win the tie, and oddsmakers have them to win by over 1.5. Catch Mamelodi Sundowns vs AmaZulu in the Absa Premiership game at Loftus Versfeld Stadium tomorrow November 26.