The second Soweto Derby of the season takes center stage this weekend in the Telkom Knockout Cup quarter-final game between Kaizer Chiefs vs Orlando Pirates. The TKO match is the first match that the two teams have to play against each other in a space of a week. They will also play their first leg of the 2019-20 PSL season the following week.

The last time the two clubs met, it was in the annual curtain-raiser competition, the Carling Black Label Cup. Pirates walked away the victors of the tie after a 2-0 result at the FNB Stadium. Both teams come into the match with league wins against Mamelodi Sundowns and Highlands Park respectively. Amakhosi staked their claim as league contenders of the Absa Premier League against the defending champions, winning 2-0 away to Downs. Pirates won a nervy game against Highlands Park to get their season back on track. 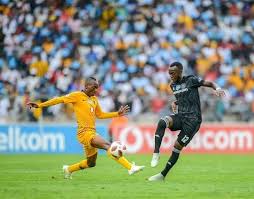 There has been a lot of scrutiny towards the referees and which teams benefit from wrong calls. It has been suggested that Chiefs have benefited the most from incorrect calls by the linesman, fueling the massive call for Video Assistance Referee technology to be introduced in South Africa. The Bucs was the last team to benefit from an offside call by the officials, with fans suggesting that it will be a game of the referees.

The Kaizer Chiefs vs Orlando Pirates game has always been a tense affair on and off the field, with coaches having their own squabbles on the sidelines. While Chiefs might have the superior run of form, they have struggled to win against Pirates of late. With Pirates have an outside chance of mounting a realistic challenge to the league, they will use the TKO cup to try and win some silverware this season.